Southern Vietnam is truly where paradise exists. Its’ convex swathe of coastline is, for many, reason enough to visit the country. However, aside from beauty, the area also boasts sophisticated cuisine, world-class nightlife, and a fascinating history that makes southern Vietnam a must for all traveling enthusiasts. However, for those who are pushed for time, it is possible to taste a small but significant portion of the region in a week or less. For those working within this time-frame, here’s what we think you should see.

Our suggested itinerary is best fit for:

Flights arriving in Tan Son Nhat airport, one of the busiest airports in Vietnam and Asia.

Ho Chi Minh City, commonly referred to as Saigon by locals, may not be the Vietnam’s official capital, however it’s the nations’ financial and commercial hub, and largest city. Vietnam’s 1986 regeneration project, known in Vietnamese as Doi Moi, brought about sweeping changes to the entire country, which were felt the strongest in Ho Chi Minh City, and are largely credited as bringing Vietnam as a whole into the 21st century. This effervescent city, perched on the banks of the Saigon River, is a thriving metropolis with a fascinating history that reveals itself at every corner.

Phu Quoc ("foo kwok") is a large tropical island that’s actually closer to Cambodia than Vietnam geographically. Once a hidden treasure reserved for those travelling southern Vietnam, the island has, in recent years, been the site of increased development and foreign investment. This, along with direct flights from the UK and other European nations, means that Phu Quoc’s days as a quiet paradise may be numbered.

It is possible to get to Phu Quoc via direct flight from many international destinations, including, now, London Heathrow. Flights from Ho Chi Minh City are plentiful and economical; however, train and bus travel are also popular, and significantly more scenic, but can take ten hours, rather than the one hour it takes to fly between the two locales.

If you didn’t want to fly, there are two options to get to Phu Quoc from Ho Chi Minh. Take Mai Linh bus to Kien Giang and then a ferry to Phu Quoc.

It is also possible to take a cruise from Ho Chi Minh City. Departing daily from 8am and 1pm from the port of Rach Gia, SuperDong and Savana ships take around two and a half hours and make for a fast, relaxing journey for the price of around 400,000 VND (or 17.5 USD) one way.

Visitors flying directly to Phu Quoc and staying there do not require an entry visa for 30 day stay. 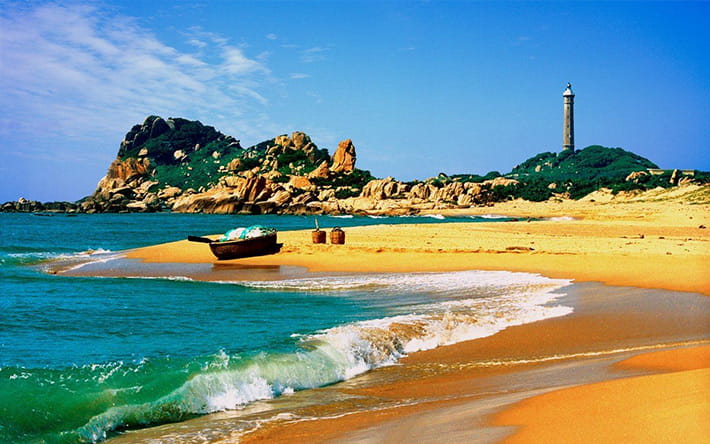 Mui Ne Beach, one of the most beautiful beaches in Vietnam.

Mui Ne is still a relatively undiscovered seaside destination compared with other Vietnamese coastal cities, however for those who venture there, it is a taste of paradise. Whilst modernization and development are creeping in (and who says that’s a bad thing?), the relaxed essence of Mui Ne has persevered. The tropical white-sand beaches remain peaceful and idyllic, and the fantastic, and highly unusual sand dunes offer an exotic texture to the landscape.

Mui Ne is accessible via taxi, which takes around four hours, or via bus or train. The journey usually takes between five and six hours. If you take the train you will arrive in Phan Thiet and waive down a taxi to Mui Ne.