Vietnam is truly a country of staggering beauty, and endless diversity; from the sweeping rice terraces and ancient hill tribes of the north, to the tropical islands and rolling sand dunes of the south, to the high-octane cities of Hanoi and Ho Chi Minh City, you’d need a lifetime to see all that Vietnam has to offer. However, we think that three weeks is certainly a good head start. 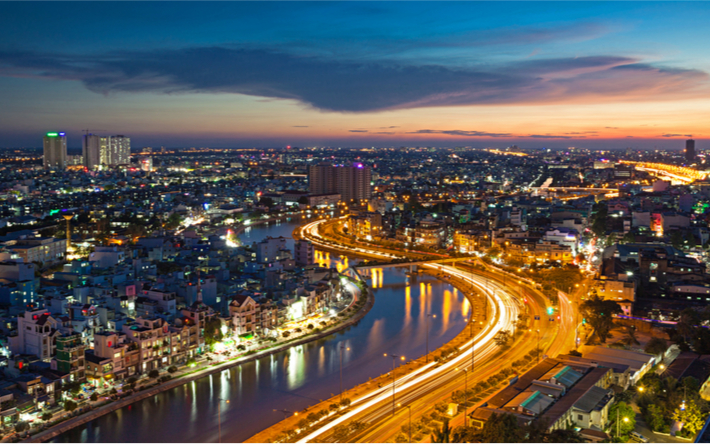 Starting in Vietnam’s biggest city and financial center; Ho Chi Minh city is complicated, fascinating, beautiful and dynamic. Ancient traditions blend seamlessly alongside bursting skyscrapers and gadgets, making the city a sure contender for Asia’s best city. Still referred to as Saigon by its roughly eight million residents, times haven’t always been so optimistic here. But since the economic changes brought by Doi Moi in the 1980’s, the city’s regeneration has propelled Vietnam as a whole into the 21st century with gusto.

It is also easy to travel by bus, train or car from Ho Chi Minh City. Just ask at any of the thousands of travel and tour operator shops you will find dotted around the city. 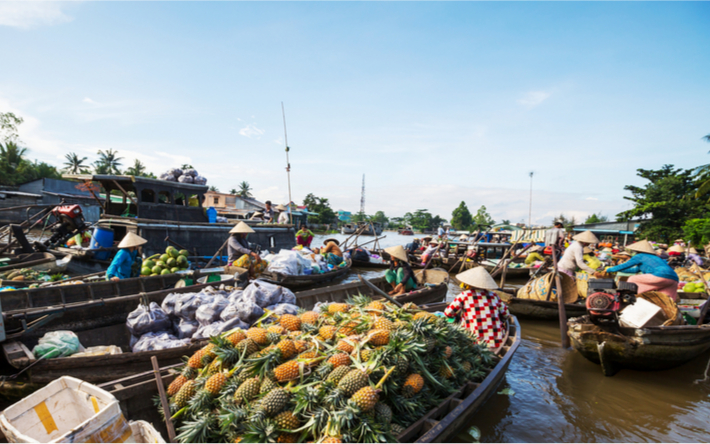 The Mekong Delta is the very lifeblood of Vietnam; this long, meandering delta which feeds most of Southeast Asia is truly the stuff of a geography textbook. Boats, houses and indeed entire markets float upon its waters, creating entire communities based around selling, sharing and buying each other’s’ produce, wares, or meals, without ever having to step on land. 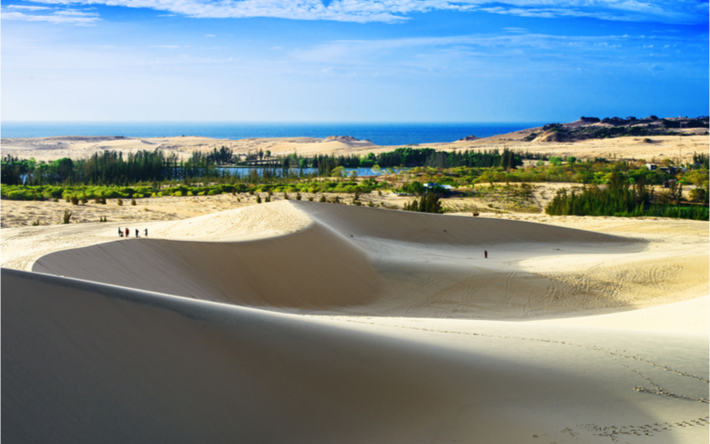 Mui Ne is still often overlooked for more famous coastal destinations such as Danang or Nha Trang – but may be this is for the best. Mui Ne offers sleepy fishing villages, sparkling water, and, believe it or not, sand dunes. Mui Ne is the perfect place to lay your head down for a few days, enjoy the plethora of fresh seafood, and play around on one of the more unusual geological wonders Vietnam has to offer.

To get to Mui Ne, you can jump in a (pre-booked, if possible) taxi from Ho Chi Minh for the roughly four-hour journey, or you can save money and organize a bus or a train. Buses leave from Pham Ngu Lao and will take roughly six hours one way, whereas the train ride takes around four. For those interested in taking the train, head to nearby Phan Thiet early in the morning, usually around 5.30am to secure your chances of getting a ticket for the 7am train. Tickets are 8 USD. 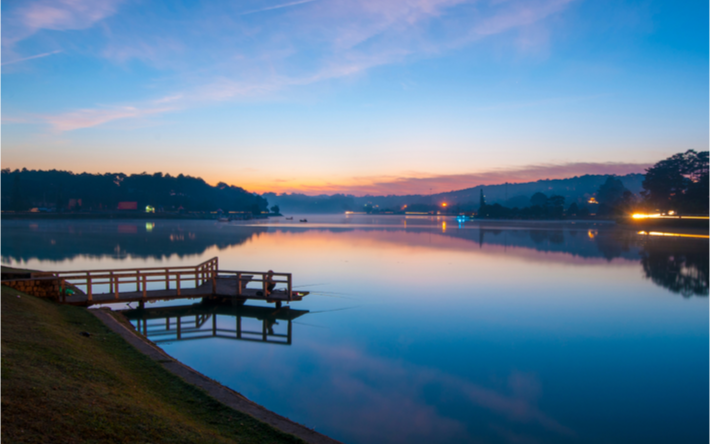 If Mui Ne is a little Sahara within Vietnam, then Dalat is a little Swiss town. Originally built by the French who struggles to cope with the searing humidity of the south, Dalat has its own micro-climate thanks to the surrounding mountains, and stays cool and crisp year-round. The mid-sized town is covered in pine forest, and is celebrated throughout the country for its cultivation of strawberries, peaches and Avocados.

Dalat can be reached by Mui Ne via taxi (price agreed beforehand) which takes roughly three-and-a-half hours, or via public bus, which takes around five, and leaves twice a day; once at 7am and once at noon. For bookings, ask at your hotel or buy directly on the bus, which leaves from Mui Ne’s main street. 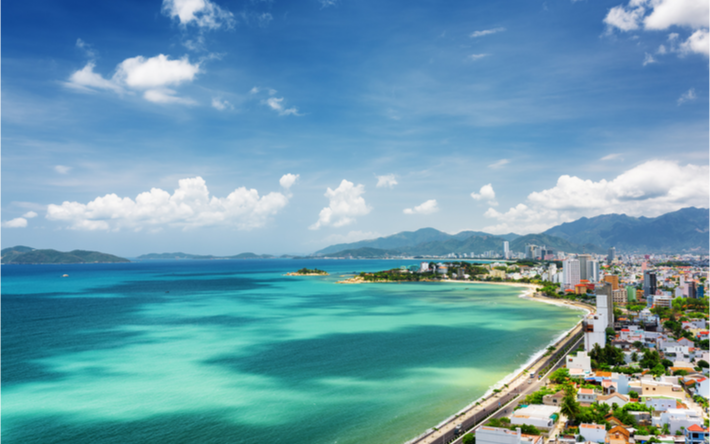 Situated on a white-sand beach among a constellation of dreamy turquoise hills, Nha Trang is gaining notoriety worldwide for its stunning beauty. However, Nha Trang is much more than just a beach; the city itself is modern, luxurious and clean, thanks to a recent increase in foreign development. Along the seafront promenade you will find boutique bars, chic resorts and gorgeous seafood restaurants that really give the city a holiday feel, but outside the tourist traps, Nha Trang offers a genuine taste of Vietnamese history. Buddhist temples, Gothic French churches and Champa-era historical sites can all be found a short drive away.

Nha Trang is just a short three-hour drive from Da Lat, which is easily accessible by taxi or motorbike. Public bus is also a great alternative and takes around 4 hours. 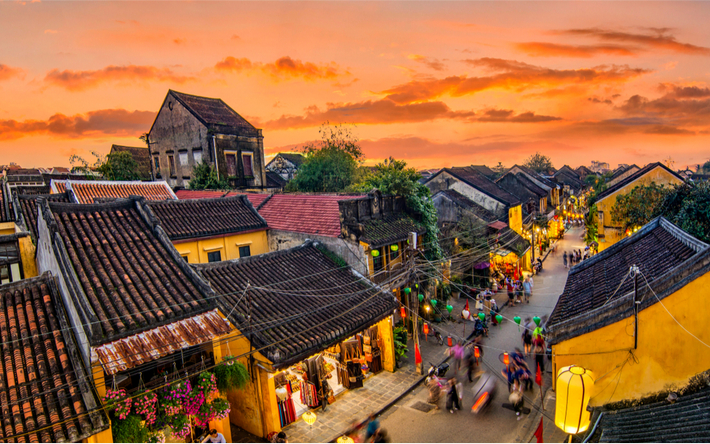 Hoi An - A view from above

If you see nowhere else in Vietnam, make sure you see Hoi An. You could spend a large portion of your three-week trip alternating between the ancient old town, complete with its world-class cooking schools, tailors and restaurants, and the many beaches which surround the town. Hoi An is synonymous with the glowing lanterns that adorn the old town, a nod to the accient traders who depth at this port town. You will also find vestiges of Japanese and French influences, from the crumbling facades of the colonial-era buildings, to the chewy udon-like noodles found in the town’s most celebrated dish – cau lao. Hoi An is guaranteed not to disappoint, but don’t just take our word for it- the town was awarded its title as a UNESCO World Heritage Site in 1999.

From Nha Trang, the fastest and easiest way to get to Hoi An would be to take a domestic flight up to Da Nang and to then take the short public bus ride to Hoi An. From Danang, you will easily reach the rest of central Vietnam via bus, train or motorbike. 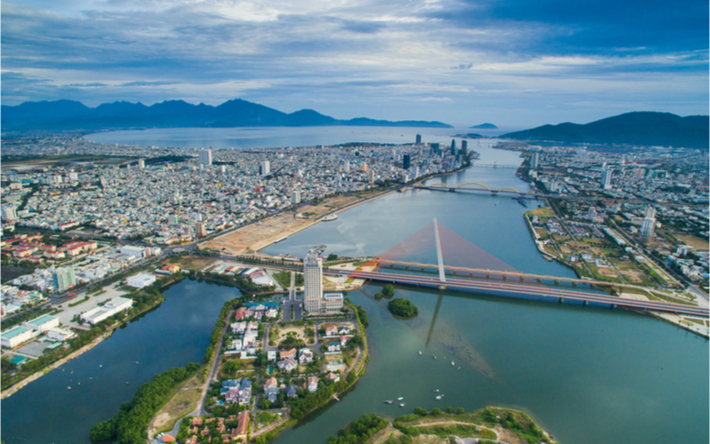 Da Nang city from above

What used to be a place to simply rest between Hue and Hoi An, is now one of Vietnam’s most treasured cities. Danang’s economy has boomed in recent years, with foreign investment flooding in to new shiny resorts, improved transport options, and a new airport. Situated over the beautiful Han river are a collection of modern bridges, including the famous ‘Dragon Bridge’, which spits fire every now and then.

Danang is the most easily accessible destination in all of central Vietnam, and is serviced by its well-connected international airport. Its location at the nexus of the country means that it is also well connected by buses and trains – as well as travelers and travel agents who can help you plan your route. 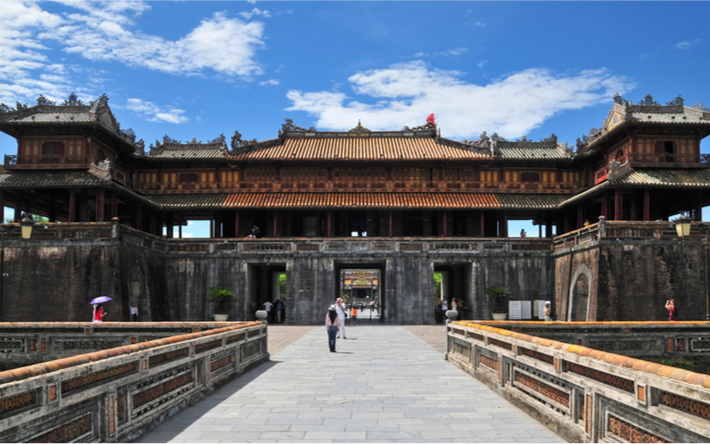 A short way north of Danang sits Hue; Vietnam’s old Imperial capital. This relaxed town is bursting at the seams with history, both recent and ancient, which its citizens wear proudly. Although this town was the scene of one of the fiercest battles of the war, the town has seen waves of regeneration brought by tourism, and feels proudly optimistic.

From Danang, it is recommended to drive a motorbike trough the Hai Van pass to Hue, where you will be able to drop the bike. However, if you don’t quite feel confident enough to drive, your next best bet is to take the Reunification Express train from Danang (as well as Hoi An, or even Saigon) to Hue. This old school train is comfortable and reliable, however tickets will cost you slightly more than if you were to take a standard public bus. 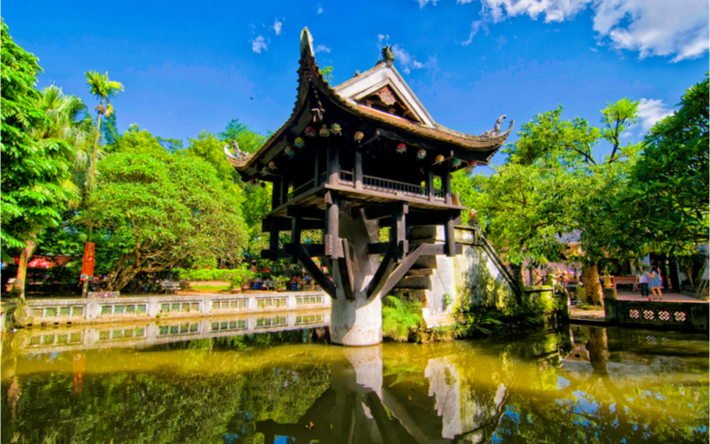 One Pillar pagoda in Hanoi, Vietnam

Hanoi defies explanation; no words can recreate the blaring horns, the pungent smells, the friendly people, nor the delicious food. Its smells and sounds threaten to disgust, yet intrigue with each coming day. And, it’s location means that it’s the perfect vantage point from which to explore the rest of northern Vietnam. 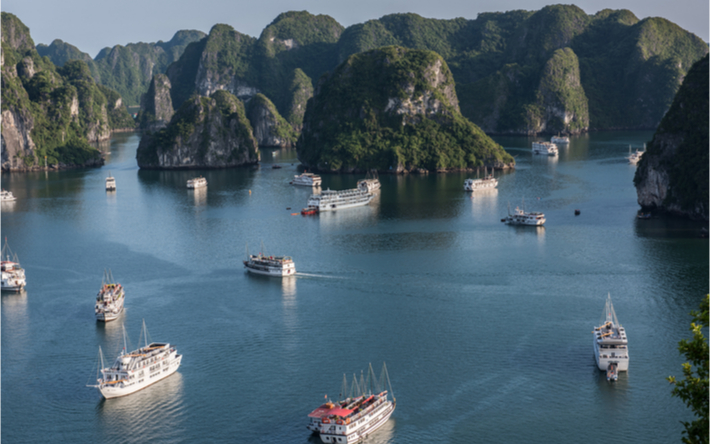 Halong Bay is just about as picturesque as planet earth gets. This UNESCO World Heritage Site is only a short three-hour drive from Hanoi, and yet couldn’t be further from the noise and pollution that Hanoi is renowned for. Enormous, limestone karsts coated in tropical jungle erupt from the turquoise surf, amidst the backdrop of the huge open sky. Dotted along the bay are colourful traditional fishing villages who have lived there for generations, rarely, if ever, venturing onto land.

Just across the bay lies peaceful Cat Ba, perfect for a boat trip around the karsts and accessible both from Halong Bay and Hanoi alike. Cat Ba is also well known for its large national park, which is home to a variety of exotic birds, plants and mammals, including the last 58 of the golden-headed langur. The island is also home to not one, not two, but three beaches, and an ever-increasing number of seafood restaurants and cheap, backpacker bars.

Hanoi is heaving with tour operators, who can easily arrange one day or multi-day trip to either Halong Bay or Cat Ba. For a one-day trip, booking a few days in advance is recommended, and buses usually leave from the Old Quarter early in the morning. A return bus ticket to either destination usually goes for around 25 USD return, and tours around the bay can be anything from 7 USD including lunch, to private boat tours lasting for a few days of around 2-300 USD. 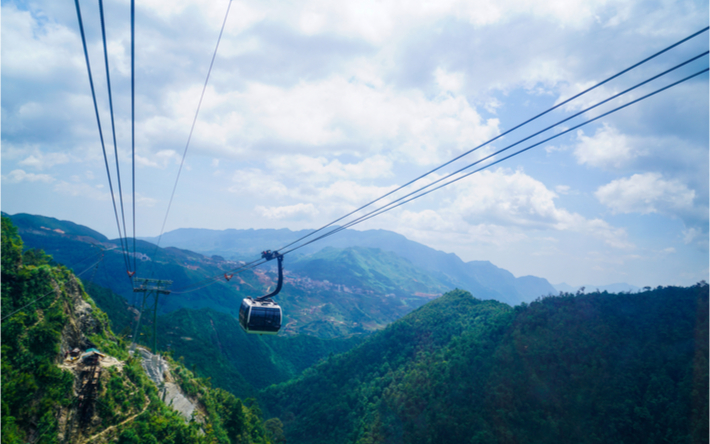 Cable car to the Fansipan summit in Sapa

A visit to Sapa is to see a glimpse of old Vietnam. Rolling rice terraces, ancient hill tribes and traditional stilt houses amongst the backdrop of mist are why thousands of tourists visit Spa every year. Nestled amongst the Hoang Lien Son mountain range, Southeast Asia’s tallest peak, Fansipan sits just outside of Sapa town, so hiking and nature enthusiasts will be well sated here.

The easiest and most reasonable way of reaching Sapa is via a nine-hour overnight train from Hanoi Station to Lao Cai. Trains are comfortable and relatively cheap, and the views are magnificent if you travel during some daylight hours. Tickets can be booked in advance from Hanoi Train Station on Le Duan Street, or via a ticket merchant or tour operator at extra cost. Once in Lao Cai, Sapa town is just a 45-minute drive away via minibus or taxi, and once you’re in Sapa, most things are reachable by foot.