Welcome to Vietnam – a land of infinite diversity, complexity and beauty. It is a country that has not long shed its image as a war-torn state, and is now racing to become one of the most desirable tourism destinations the world over.

Although the country is only small, its long shape means that’s it’s spread over a huge variety of terrains; from tropical rain forests and sand dunes in the south, to rolling rice terraces in the north, to UNESCO World Heritage Sites and white-sand beaches in the center.

You could spend the rest of your life discovering new things in Vietnam. But, if you’re pinched for time, here’s what we think you should see with only ten days!

Our itinerary is good for: 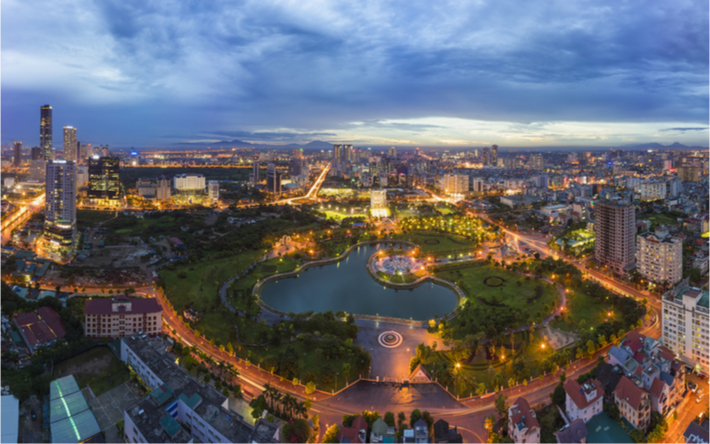 A view from Hanoi skyline

All trips to Vietnam should start in the nation’s capital – Hanoi. This is a city full of life; a veritable feast for the senses. Nowhere else on earth will you find old ladies selling fruit from a basket next to a Korean cosmetic store situated in a French colonial mansion. The epicenter of Hanoi is heaving with commerce – from local pho stands, to national chains, and in recent times, more and more international conglomerates are creeping in. However, there’s more to Hanoi than just shopping. There are serene temples and lakes all over the city, offering respite for the hard-working Hanoians. 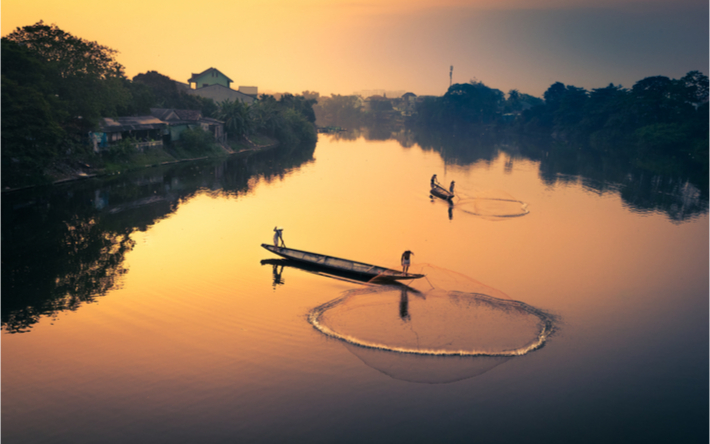 Fishermen on the famous Perfume River (Huong River). The river is also known with many other names such as Lo Dung, Linh, Dinh, Kim Tra, flows accross Hue city.

Pronounced hway, Hue is a must for any traveler to Vietnam interested in history. The city was badly damaged during the fighting that the country saw during the 20th century, however vestiges of its traditional past can be easily seen. The old imperial citadel of the 19th century still stands at the center of the city, offering an insight into Hue’s former glory. However, the rest of the city has also recovered well, helped in no small way by the steady rise of tourism to the area. By virtue of this, cafes and bars aimed at tourists exist near the banks of the Perfume River, and travel options are easily available.

It is possible, and extremely fun, to make Hue the second stop on your ten-day Vietnam trip by taking the train from Hanoi. Take the Reunification Express Train overnight from Hanoi Train Station and arrive in Hue the next morning, after watching the beautiful scenery of Vietnam pass you by. Tickets for a soft sleeper bed go for just under 60 USD one way, but are well worth it for the romance and comfort of the journey.

Colorful street with shops in Hoi An

A trip to Vietnam would be not complete without a visit to Hoi An – undoubtedly Vietnam’s premier destination. Here you will find beautiful beaches with amongst the cheapest day rates for shaded sun loungers in the whole of Southeast Asia, delicious food, and a UNESCO World Heritage Site as the local Old Town.

The Old Town is the atmospheric cultural center of Hoi An; where lanterns illuminate ornate Japanese bridges amongst quaint, rustic French colonial townhouses. There really is nowhere else like here on earth, and one could spend an entire month here alternating between the white-sand beaches, divine local restaurants and world-class tailors that the town is so renowned for.

Getting from Hue to Hoi An is very easy, and usually great fun. We recommend hiring a motorbike for the roughly seven hour drive between the two locales, which will take you via the amazing Hai Van pass which winds up, and then quickly down a small mountain range, offering panoramic views of nearby Danang. However, it is also possible to take the Reunification Train (mentioned above) between Hue and Hoi An, and buses travel regularly (and cheaply) between the two. 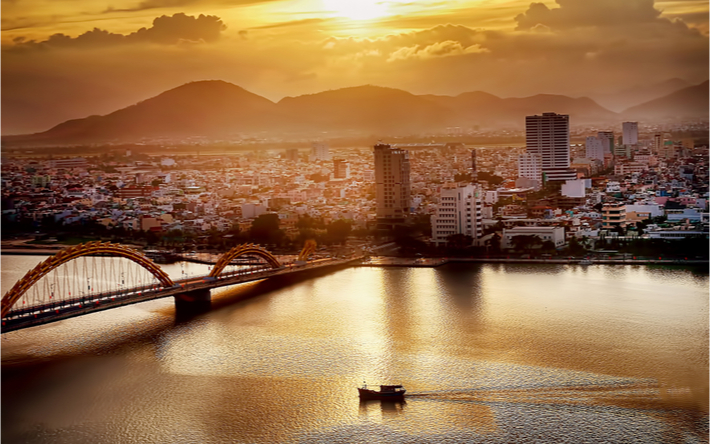 Danang has long been overlooked as a provincial backwater, only to be seen as a stopover between Hue and Hoi An. However, those days are long over, as domestic and international investment has mushroomed over the last few years, resulting in a staggering regeneration of the formerly sleepy seaside town. Restaurants, bars and shiny new resorts now line the shore, and Danang is becoming hugely popular with expats and tourists from both Western and Asian countries.

Danang is hugely well connected; its location in the center of the country means that train and bus routes run directly through Danang regularly. It also boasts the third largest airport in the country, servicing regular flights to and from domestic and international destinations such as Singapore, Seoul, and KL. From Hoi An, Danang is just a short one-hour drive away, so taxis or public buses are your best option, unless you’re brave enough to rent a motorbike for the short coastal drive!

The coastal city of Nha Trang is framed by its backdrop of romantic blue hills and white sandy beaches. It is famed for its gorgeous coast, as well as its range of historical sites, including Champa relics, Buddhist temples and French churches. Investment has poured into the city in recent years making the city dynamic and modern, with just the right concentration of nightlife.

Nha Trang is best reached by domestic flight from Danang, which takes around an hour and can cost as little as 500,000 VND one way when booked in advance. It is also possible to take the bus, which takes ten hours, however those who enjoy traveling in comfort may find the journey a little unpleasant.

View from a roof of Sai Gon Center building

Vietnam’s largest airport, Ho Chi Minh’s Tan Son International is served by many international carriers and offers daily direct flights to and from destinations such as New Zealand, Hong Kong, Dubai, Melbourne, Frankfurt and London, so onward travel will not be an issue from the city.