Hanoi, the capital of Vietnam, brings visitors a feel of both traditional and modern, the result of centuries of foreign influences intertwining with one another. Though many consider Hanoi as the starting or ending point of their trip, this charming city still has a lot to offer and definitely worth a look. Here are 11 things, in no particular order, to do, to visit when in Hanoi.

Hoa Lo Prison – also known as Maison Centrale, is a haunting and realistic insight into the Vietnam War under French Colonial that tourists should not miss. Hoa Lo displays focus on the suffering of Vietnamese revolutionaries who were detained here during the war, with many exhibits, photos and learning experience. Altogether, this makes Hoa Lo the most interesting historical site in Hanoi. Walk through it, and make your own determination of what actually went on in the prison.

Ho Chi Minh Mausoleum is built in August 29, 1975. Here rest the country’s hero “Ho Chi Minh”, or “Uncle Ho”, embalmed, cared for and guarded 24/7. Visitors can visit the mausoleum to pay respect and see for themselves the one who did the impossible, stood up and liberated the country from colonizing forces. The Mausoleum itself was built on the impressively sized Ba Dinh square, so outside of visiting hours, visitors can also go for a jog and appreciate the architectural beauty of the mausoleum itself and its meticulously cared-for surroundings.

The Temple of Literature was originally used as a University for aristocrats and royalty, and later on for everyone. Carefully preserved, the Temple becomes an extremely popular destinations just before exam seasons, when students from all over would visit and pray in hopes for better grades. Divided into 5 courtyards, with numerous of wells and structures, most notable is the row of tombstone-carrying stone turtles with the names of 1307 doctors carved onto it, the Temple is one of the most picturesque and an extraordinary example of Vietnamese architecture of the past.

Known as “Thang Long four guardians” or “Thang Long Tu Tran”, these for temples, situated on 4 sides of the city (East, West, South, North). These temples act as the spiritual guardian for the city with:

It is highly recommended that one would spend some time on their hands locating these temples, walk along the outside and appreciate the exterior design of these carefully thought-out structures from the past.

The St. Joseph Cathedral is also one of the must go places when visiting Hanoi. Built early on during the French colonization, the Cathedral has been the go-to spot for many Christian followers and now, many non-Christian and tourist as well. A glimpse into 19th century Hanoi, this Gothic style tall windows, the stained glass, the vaulted ceiling, etc. made up one of the most beautiful structures there is in Vietnam, especially during the religious holidays such as Christmas or Easter.

Don’t sleep just yet! When you think you’ve completed your share of Hanoi sightseeing, head to Bach Mai, where the real fun starts only after 7. The street during the day is just like any street in Hanoi: slow and busy. But what makes Bach Mai the street to visit is the fact that Bach Mai is the home of many universities, and where there are universities, there are young adults with nothing but time and spare change. The street is filled with food vendors that opens until the dark of night to meet the demands of university students, and many are even famous among the local foodie community. Walk along the streets at 10 and try out the famous Bun Rieu Cua (Vietnamese field crab noodle soup) and Sticky rice. 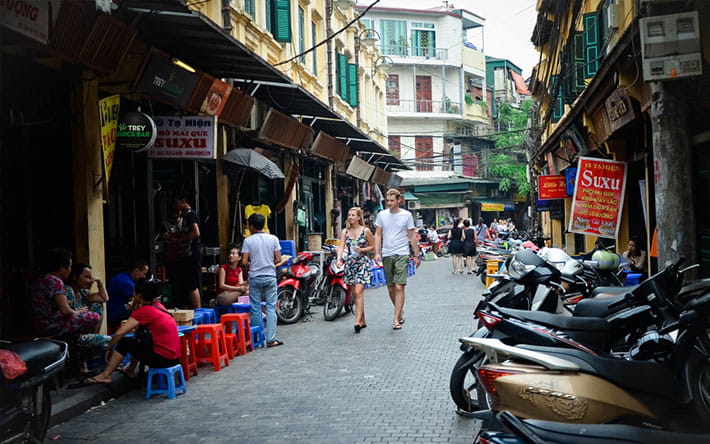 Laying between the Red River and the once-great Hanoi Citadel, The Old Quarter has always been the important icon of Hanoi. For most visitors, the influences of French architecture in Hanoi is very much a real surprise. Keep an eye out for the classic tube houses, deep alley and narrow streets of the Old Quarter and you will be amazed finding the old among the new. At night, The Old Quarter of Hanoi comes alive with lots of street vendors, beautiful live music and the famous Bia Hoi (Vietnamese Brewed Beers) Corner where you would find both locals and tourists gather to drink the world’s most inexpensive beer at just 20 cents per glass.

8. Museum of History of Vietnamese Military:

The Military museum is one of the oldest in Hanoi, an excellent location for history buffs wanting to learn more about Vietnam’s war-riddled past. The museum is separated into 2 parts, the outdoors section and the indoors. Visitors can see many war machines and junks leftover from the war detailed origin, while the inside portion of the museum shows the evolution of the Vietnamese military from as early as the Hung Vuong era till now. 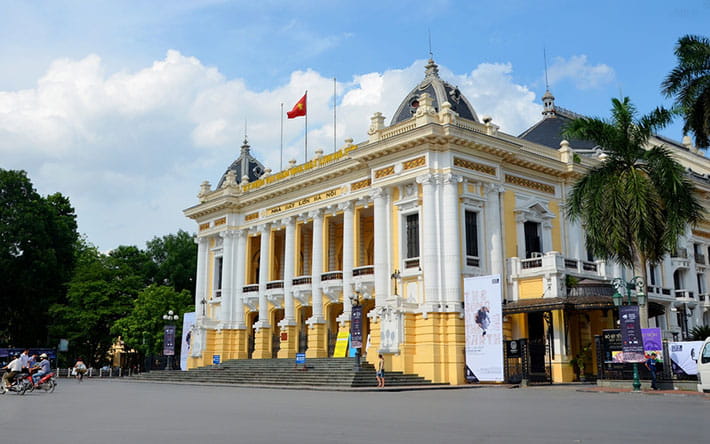 Once an essential architectural piece in Hanoi, the Opera house has passed it’s glory and has not been the place of choice for many younger generations, but it is still highly recommended and definitely not a waste of time to come and have a look. Completed in 1911, the Opera house is designed with the Renaissance in mind, evidence by the Italian-made marble flooring, copper chandeliers and French murals. The place used to solely host Western performers for French officials and affluential individuals, but now, the opera house is opened for all and hosts a wide array of performance from multiple mediums, and the go-to place for celebrity performers to perform. A cultural experience that visitors should not miss.

The oldest market of Hanoi, in 1889, Dong Xuan is famous among locals for selling not only everything but also with insanely cheap price. This huge market takes up the entire block and not only limited to the building, Dong Xuan also includes hundreds of stalls surrounding the outside as well. Though not very tourist friendly, Dong Xuan is an excellent place for those who want to see what the wet market experience is all about with vegetables and meat offered in abundance, both fresh and dried, or clothes and fabric being sold on the second floor, or maybe some quirky shops that sells talismans, bracelets or even back scratchers in between.

Though not the center of the nightlife as it’s other well known colleague Hoan Kiem, West Lake is still unrivaled in terms of godlike street food and beautiful coffee shops. One of the best ways to enjoy the evening is to just simply drop off somewhere, walk along the road and try out all the crowded street food shops, enjoy the view and finishing off by stopping at a lake-view coffee shop and enjoy the rest of the evening before getting back to the hotel. For the food enthusiast whose looking for a destination to go to, the West lake has amazing “banh gio” in Thuy Khue, twice as big as the regular ones you see in breakfast stalls around Hanoi, with an absurd amount of meat toppings to eat along with it. Ngu Xa is also has an extremely popular Pho Roll shop (Pho Cuon), famous for its crispy deep fried Pho dipped in sweet and sour fish sauce.

Nightlife in Hanoi - The 5 best pubs and bars in Hanoi